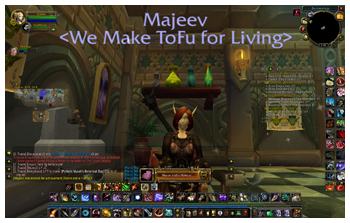 Like the title says, in Wrath of the Lich King, you can change mode. It’s call heading into the barber shop. They should really distinguish Barber and Salon… sounds kinda cheap. Anyway…

Well it was available as soon as the expansion came out, but it took me around 3 weeks to find this part out :)

Its very simple, right click on the seat, and you can go through character selection again. Except you can’t change your race / sex obviously =P LOL

The more embarrassing part is actually getting the achievement. Since it’s my first time, it was announced while everyone was in RAID, so knowing I’m a dude, they were like “OMG SO GAY” lol… and I can’t agree more, it’s pretty GAY haha! It was quite an embarrassment :)

Spoiler – Veteran of the Wrathgate

Angrathar the Wrath Gate is the barred entrance to the Icecrown Citadel. I’ve just completed the quest to see the tip of the story of what exactly happened to the frozen throne. If you don’t plan to play WoW and is interested with what sort of happened, feel free to watch. It’s one amazing trailer of the WoW storyline. It will surprise you.

Here’s a link to WoWWiki article [2]about the cut scene you just saw.