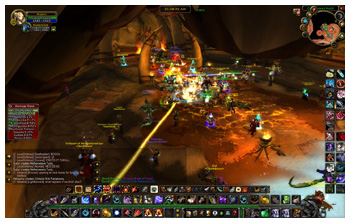 So after a little bit over 3 months, I started WoW again. It all started with the debate of end-game experience. If you ask me honestly, WoW’s end-game is much more fun than FFXI, in all aspects IMO.

Before we begin, this is my 1st day returning to WoW.. our leader Thrall (imagine being Star Sibyl) dead… Screenshot on the right is the Alliance raping our Horde leader. You’ll might find some laughter on our Server Forum [2]. The typical Alliance bashing Horde drama.

Another reason was due to a heated debate of using 3rd PT plugins for FFXI and how it creates an unfair advantage. I honestly say, yes the people play on PC do get “additional” features such as long-ass macros, speed of macro execution, the convenience of seeing your JA’s or even seeing your TP. But IMO, if FFXI was -just- a PC game like WoW, then they would have no problem supporting these additional features. But with console limitations, these were never implemented. 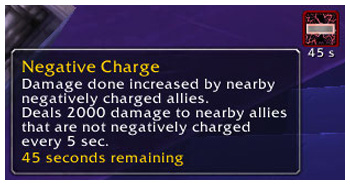 I’m a fan of plugins. I believe we shouldn’t be spending our time worrying about how efficient we can flip between two macro books just to equip 16 pieces of gear. Our attention should be focused on more important stuff such as watching Stun, timing nukes to land SC (which don’t exist anymore) and generally, the “gameplay” itself. No, we spend so much time in FFXI just to be efficient.

(FOR EXAMPLE), lets say you cannot Provoke when you aren’t facing the mob. Then the skillful part of FFXI should be making a 180 degree turn quickly, Provoke, then turn to the direction you were running and keep kiting Kirin. No, the skill in FFXI is just about spamming that Provoke macro every 30 seconds with correct gear… so lame… (EXAMPLE OMG) 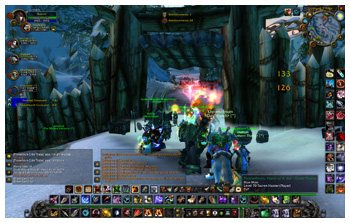 Which is one thing that really IMO keeps WoW gameplay way ahead of FFXI. Its just where the fun resides. In FFXI, when BrainJack comes, people can say in PT chat (omg BJBJ, so even the person wasn’t looking at the mob, reading PT chat would be enough, swap weapon, good to go). In WoW, everyone must pay attention. I’ve explained how Flame Wraith works back then, where a random PT member gets a flame surrounding, and if he moves, everyone takes a ton of damage. Well today its the buff “Negatively Charged”. If you stand near a “Positively Charged” person, whole raid takes damage. So you got to be organized, and alert. No one can help you (can’t remind you about BJBJ, stun stun stun!) but yourself. Everyone in a WoW Raid makes a difference. It makes the game challenging, but at the same time, discourage people to play… when morons are around.

WoW Curse.com itself got like 3320+ addons to make your gaming easier. Whereas FFXI… very little. Not that there’s no developer, but everyone’s so paranoid about using them. I hate the PS2 (although they are the safest platform to play on lawl). So I’m giving WoW end-game another try, hopefully less morons (really, 1 is all you need… standing at the wrong side when charged, moving in Flame Wraith…). We’ll see! I miss plugins, WoW is like… got everything. I wonder when’s the Pizza Hut plugin coming out :D! Order pizza in WoW without leaving your PC xD! 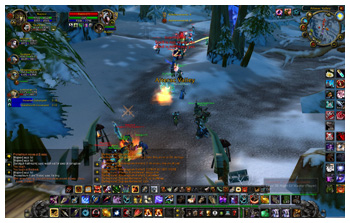 The one thing I missed.. PvPing… I played some Aarathi Basin and Alterac Valley. Although a little bit rusty, but still on top of a lot of people lawl (like top 5 out of 80 in dmg still). To the right is a screenshot of how we were guarding our Choke Point. Both the Alliance and Horde didn’t wanna cross that line :D We were all waiting for one side to make the move. I did =P and made a mess lawl!

Anyway, going to spend a bit more time with WoW this time :) Also, Wraith of the Lich King is around the corner ‘.’ even Talent Tree is out :O its sick! Warlock gets a spell (On next enemy spell cast, mana cost increased by 100%) ha ha ha…. I’d cry if I Cure 5 for double the MP :D Its worst than Silence. Now that takes skill :D to cast carefully. If you don’t notice the buff… you’re fuked… it doesn’t take skills to spam a button, but it takes skill to “time” your spell, such as curing after debuff wears off or… hold onto the urge to cast! You can probably find more about the expansion on the WoW BG forum (http://www.nihilum.eu [6]).