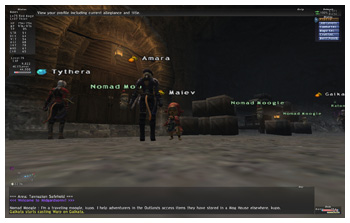 I’m afraid no one would believe me, but before you EMO at me, please finish reading it first.

For so many times in the past 6 months, I wanted to quit FFXI. Its been tough… I try numerous method, such as playing WoW to lower my FFXI addiction, going out more… now even moving to Toronto. I thought Real Life would be able to keep me busy hence.. will keep me away from FFXI, but apparently… all these numerous plan failed… horribly failed.

I’d love to be a FFXI Junkie.. where I just play FFXI all day… but that is not possible… especially with Asian parents. I mean the game is all fun and such… except probably the Salvage part… which is kinda okay but… still horrible in comparison to the lucky poeple… but the thing is… 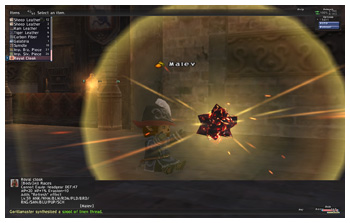 So tonight, I woke up near 3am, moved Maiev to a randomly picked server … Midgard, as a step to end my career with this Final Fantasy world. I also lowered my Goldsmithing just to prevent myself from getting so entertained… so I took up clothcraft and skillup with Vermillion cloak.. but >.> lol… got a Royal Cloak.

Well I chose today because its also a new calendar month. Square-Enix won’t bill me for another month for server transfer, so that was nice. I’m dead poor too… hence I don’t have time to play FFXI. Work 24/7 :(

I know a lot of you wouldn’t believe me. Its hard… to believe for anyone or myself… but its the true fact. I left myself online @ Midgard server for the afternoon… if you have an extra mule, just create any char on Midgard and do a /sea all Maiev, I’ll be in AlTaieu, just to prove its not some kind of mule.

I do miss Mai ducks :/ I miss a lot of people… and I didn’t even have a chance to say goodbye to Etain, Istari, Galkas, Tarus, Mean Tarus, Elvaans… and SpyCat…they are one of the best and wonderful people I’ve ever met :3 I’d love to keep playing but I got to think about my future :/ & This is the only and hard way to do it. I’ve also took all the LS Sea pop, Sky gil, Einherjar Funds, and all the ABC you guys always talked about… by accident. I don’t mean to…. I’ll return it when 3 months are up.

I’ll be alone @ Midgard, day dreaming all the wonderful times we had… on vent “Stun stun stun”, or “Hahaha Vorpal Blade Tarus”… now its just all me…all alone :/ dreaming of our good old times…