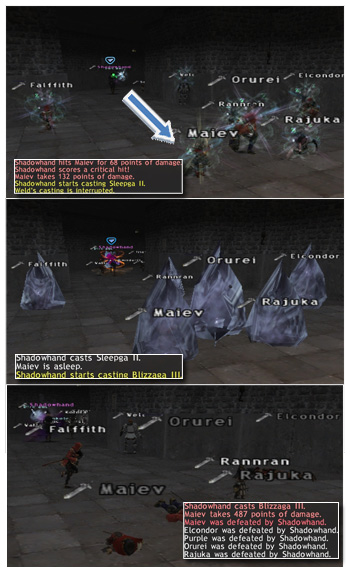 THIS is how you play Campaign.

So long time no post… since I’ve been extremely busy with work, but now that’s “sort of” settled, I can now have time to play regularly without worrying about “finding work” hehe.

Campaign battle is like wut to me… I still don’t exactly know how to play.. but its pretty repetitive and boring imo. Anyhow.. so I was doing the one in Garlaige.. with a kind of “soloing” instinct in mind… I went to grab something to Solo… but apparently something happened… as indicated on the right…

Hahaha.. I MPK a bunch of JP’s! I didn’t mean to.. but it did Sleepga then a Blizzaga xD

It wasn’t bad imo! Although I was expecting MORE content since there wasn’t a patch for like 4 months but regardless…. there it was. A few things I like about this patch includes…

Playing FFXI for so long… its weird to suddenly have music while casting. I’m so used to like my customized Limbo music (FF7 Boss Music).. but now when you engage… you get something different.. and its so weird..

To me I just see it as “aggro” music lol… its extremely helpful in Salvage.. to know stuff aggroed somebody.. but its also weird to hear music say.. your teamates are pulling a detector and it already starts “playing” the battle music.. when its no where near.

Regardless.. the patch wasn’t that exciting but… I guess decent patch. WoW’s patch is being released next week.. that one is going to be awesome. Will be introducing new instances (opening up new regions), new recipes, nerf bat for Warlocks and… a balance to Warrior / Druids Arena combo :) Its at 60% download atm. (Oh yea, WoW patch begins their download 5-6 days before patch dates, and on the date of patch and you press play, that is when it starts installing, much better than stupid FFXI’s version update mechanism)