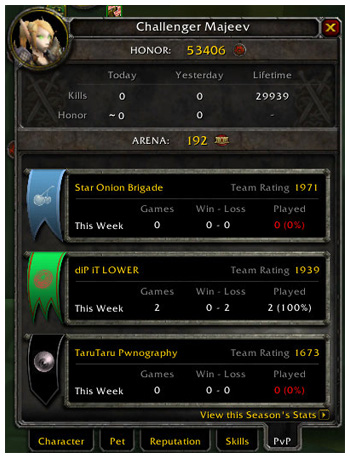 This was my last week’s highest ranking :/ It dropped though, but it was nice to see that I can reach world ranking :o. With a 80% winning ratio, I got a whooping 800 Arena points :) An average player gets around 300… so woot :) Kinda feels like I “somewhat” beat WoW.. but then you can never say you beat WoW until you made it to the 1st… which is pretty impossible… being the 1st out of 10 million people is just.. a dream. But I’m happy being the top 20% Arena PvP ppl :)

There are lots of Drain Teams. People really try to get you exhausted. Its just something you have to deal with. As a Hunter, you really have to utilize your Aspect of the Viper and… have high INT (Now I know why poeple use Duel Wield + 30INT Enchant on both weapons ([item]28314[/item]) over a good-stat Hunter Axe ([item]34014[/item])). When both teams defend each other’s “rush attack” or “burst attack”, then its just the matter of who can outlast the other team. Since you’ll constantly get your MP drained out, you need to have good MP regeneration yourself to keep others’ MP drained as well as have a few extra MP to pull out a few Steady Shot. Its crazy…

I really enjoy WoW’s PvP… its something not based on luck, but purely on skills.

I’d love to make a video or record an Arena fight… but it slows down my PC and… don’t allow me to react most of the time due to recording lag.

I got Nashira Gages! (That no one wants! LOL)

Anyway.. on the side note. I finally got something in FFXI lol! Its leftovers that no one wants ;) Haha I know.. I could get myself some decent shit if I want… I just don’t :3 We are doing Love tonight :3 Although I’d love a Love Torque to complete my crazy Polearm setup but.. there are THF’s who can use it better :x Anyway…

Salvage… nothing to report. But I do wanna thank those that continuously send me good luck tells every night before I enter Salvage :) I do need all the luck I can get and… thanks :)

Yea… I’m in the process of learning that software. Its pretty embarrassing that I’m still using Adobe Premiere 6.0 :x Yea.. all those YouTube videos uses Adobe Premiere… a year 2001 program? (I’ve used it since high-school) lol. Trying to make an LS video with it :3 going to be kewh!