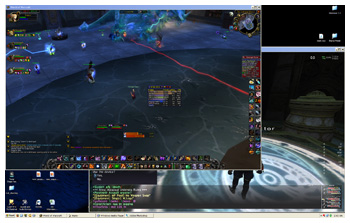 I notice you have decided to poke around your blogging community friend! But you sure select a really nice time to hit up on me T_T I was a little bit busy as shown in screenshot :) Also notice I’m like idling… cuz when you sent me a message, I panic and… I forgot to move out of the Blue Beam… I had like 30 charges on me and eventually I just died due to beam overload >.> lol but kind Druids gave me a Combat Raise :(

So I suppose although you don’t update your blog anymore, you stalk other bloggers! lol :) Its okay, wish I was less busy but I needed those [item]29434[/item] :< 60 of them to get [item]33484[/item] and since I'm a slacker and refuse to Pug heroics :< I just goto Raids! But for sure next time I'll be there to show you around Fenrir :) There isn't really much to see but at the very least, I can give you a pearl so you can chat :) 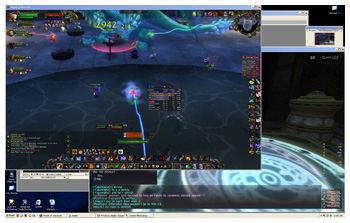 Anyway :) Whoever on Ragnarok using Maiev’s name was not me, but someone who tried to play a prank on you :) There’s a few Maiev, but I pretty much know em all ;) I’m 100% sure its someone else because when I tried to visit Jowah’s wedding.. I tried to make Maiev so I can film her wedding under my char but.. it was taken so I ended up using some ghey names :< But its all good :) I guess someone going around me acting as me is doing good things :) eg. driving Taritai crazy :) Hehe well see you around ;) typing public letter is cool ^^; Take care for now :) Kind Regards, Maiev of Fenrir ;) --- Side Entertainment --- "Real Life" Mario on Joystick.. just go watch lol :) its funny!