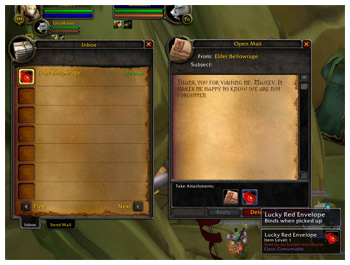 Red Pocket in my Dbox!

A bit more on WoW post these days. So today I login and was like whoa… Red Pocket? I don’t even get one from my parents lol!

Yea man.. unlike FFXI who only celebrates Japanese holiday (promotion of culture), WoW thinks globally… hence they are ahead among the MMORPG industry.

The red pocket was actually a starting quest! I took this to the Horde Capital and found an event festival area, filled with NPC that tells you the story of Lunar New Year and NPC that sells fireworks (just like FFXI), but… of course the WoW’s fireworks is just better. It actually looks like the one we play in real life too :O crackers that blow up when it hits the ground… and like stuff where you hang near the doorway to “blast away” all the evil and a new beginning! 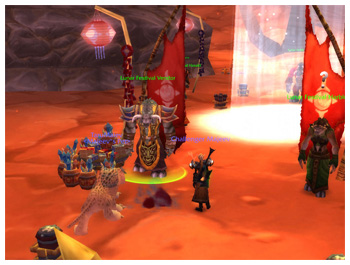 Really easy :) like the usual event stuff, you just buy stuff off NPC and use em! Its that simple!

The amount of money you spent buying crackers = quest reward so… you didn’t really profit.. well it gets quite fun later :) So… as the quest continues, I get this weird stuff like “Teleport to Moonglade” [item]21711[/item]….

I didn’t know what it was so…

It brought me to…

“Moonglade”… sounds very Night Elf-ish… since they are all about the Moon!

Anyway so I started wondering around… there was another quest that asks me to deliver something to the North.. 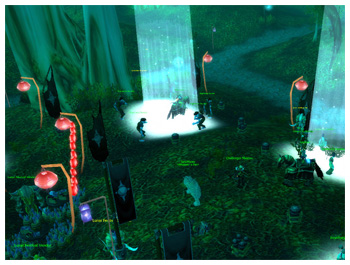 But then there was some random Alliance that walked by… my pet 1 bite him to death… WTF? I got attacked by guards =_= for no reason but thanks to Feign Death… I kinda got away.

As you see on the top right hand corner, I got a Guard Debuff.. slows movement speed so you can’t get away >.> But then… guards didn’t really hit me that hard in the first place… against my PvP equipment ;)

Walking towards my Death 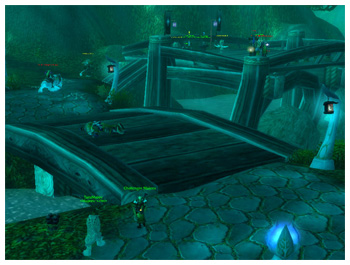 So soon I saw NPC with ! sticking out! Oww I’m there.. I also realize Alliance >.> Well normally its okay.. since the (Neutral) NPC will attack whoever is causing trouble (hence, attack the other faction first) but then… there was TONS of allies… 2-3 Stealth as I got close… I saw a Lv21 walked in and just got beaten into Pulp in a second so… I kinda backed off…

So GG to Blizzard :) It was fun while it last… or in other words.. until I got ==D blocked.