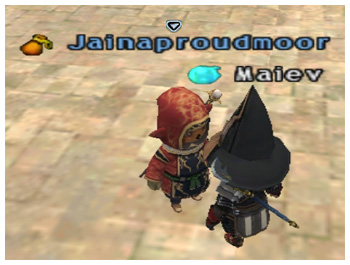 Jaina and Maiev :) Hated each other in WoW, but friends in FFXI

I never thought the 10 Golden Rule of Online Gaming [1] was so true, until someone pull Rule #5 on me.

5: If you are losing (Or failing your teammates in FFXI), it is because of lag:

Following on from the cheapness laws, you will soon get to learn that nothing is ever your fault when it comes to gaming. Lag is a process whereby everyone in the game becomes better than you thanks to the Internet helping them become cheap. The Internet does this a lot, but never affects the enemies you kill yourself, because you have skills.

Nearly every death you ever suffer in a game will be due to lag of some kind. The Internet hates you that much, even though you are so good.

Oh that was a random screenshot of Jaina Proudmoore [2] and Maiev [3] :) We are both Warcraft Characters that hated each other but in FFXI, we know each other ^_^ I wanted sign staves from him :( That’d be cool as fuk