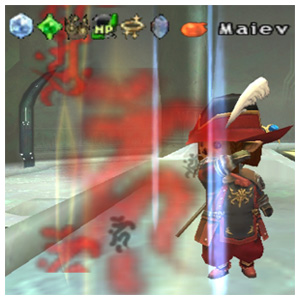 Basically, you can now make a macro to cancel a specific buff. No more selecting the Utsusemi icon and click cancel, now you can just make a macro call

and pressing that to cancel Utsusemi! Both Utsusemi: Ichi and Utsusemi: Ni are the same buff so 66 would work.

I tried to macro in Utsu Blink with cancel, such as

Its scary to see you cast the shadow without even seeing the icon blinking in and out, its like the perfect timing but I also found a flaw.

I personally like to spam the Utsu Macro before its up, or 1-2 sec before its up, so if that’s the case and it isn’t up, the macro continues to run and it would cancel your existing blink way ahead of time. So I suggest ninja to use a separate macro for this.

I try combining it with Stoneskin. With AF2 Hat, Body and Loquac Earring.

is freaking sick! I don’t even see the Stoneskin being blinked, its that precise!

There’s one good use though, its Sam/Nin. It would be best to cancel Seigan before you Utsusemi, else your recast is going to be over a minute. So I personally just put it there to ensure Seigan is never up when I do Blinks.

I tried one for Sneak, but I think manually clicking it off is nicer :O feels safer lol. I did try to cancel Sickness lol, didn’t work T_T

Well there’s other creative way you can use it, like I dunno, combine it with WS macro and Souleater? Berserk, Jin then Cancel it? Pretty sure there’s more. For a list of buff ID, you can find it here.

Added. I saw this on BG, can’t resist not to link it lol, pretty damn funny.