Mm.. Wings of the Goddess [1]? the Burning Crusade [2]? FFXI and WoW never get along together. Even I myself, hated WoW but why? Accomplishment we made in FFXI cannot be carried over to WoW. We love what we have in FFXI, hence judging WoW simply because “I like this so I’m going to hate that”. If you haven’t tried Indian food before, how can you judge they are bad?

There’s no doubt how much I love my character, but the fact is FFXI only offers challenge in the PvE (Player vs Environment) aspect. AI’s programmed by human, the abilities that each mobs can use are all set in stone. Fafnir’s abilities do not deviate from the few stuff like breath, wing, horror. Its like beating AI in StarCraft, do you feel honored? What about Warcraft III? The way how AI works in WC3 is they mine 2x gold than you. No one goes around saying I beat computer because we all know AI will always be AI, programmed by human. When Square design mobs, they make sure there’s a strategy for it. Therefore in a game of PvE, the only skillful part is figuring out the strategy. Once the strategy is revealed, it would be like a Fafnir fight.

Therefore, I started playing World of Warcraft as well. I slap it on this blog because I plan to write about the differences between two games. Since most of you probably won’t see the World of Warcraft, so I thought it would be some interesting read to see what’s really being offered between Square and Blizzard.

I’m NOT quitting FFXI to go play WoW, I simply play both. 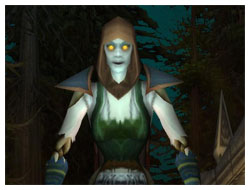 To start off an even comparison, I picked a mage. I play mage in FFXI, so to really even the comparison field, I picked mage again for WoW. She’s bitch ugly. You want to vomit when you see her! Its quite a big difference.

When you create your character [4], you see there are many selections! The 5 properties below are what makes you unique. There’s like 6-10 choices per customization, so chances of seeing the same copy as you is like lower than .01%. FFXI races have Galkas, Tarus, Hume etc. WoW got 5 races on each side, with the bottom 2 greyed out because I haven’t bought the expansion yet (not until I’m 50). Race matters in both games. Galkas gets more STR but Taru gets more MP. WoW have racial differences too. Such as Tauren gets HP bonus, Undead gets underwater breathing (yes, you can swim in WoW) and immune to certain spell such as fear (equilvalent to terror in FFXI).

Differences in WoW is, you must pick your job (they call it class in WoW). This means equipment you use for one class cannot be traded to another character. Can’t recycle your rare/ex Ridill sorry =P This might be the down side, my l33t parrying skills won’t carry over, but no worries, you also don’t have to deal with job changing and equipment. They follow your character. They make stuff rare/ex (In wow, its call Bind on Pickup (BoP), Bind on Equip (BoE))! If someone rape your ass on your lowbie job, you can instantly logout your lowbie job, login your high level job and rape them. Hate Quarking? Well kill them as well.

Although being unique is cool, but sometimes its easier to address someone based on their model. Its like oh you know that Maiev? the one with Terrycova’s model? That’s the thing I’m talking about. I kind of like that kind of identity too. Afterall, when you put on clothes, most of that is covered up so honestly I wouldn’t mind a FFXI character system, but I can see people complain not having a wide selection so whatever.

People in Final Fantasy are so paranoid about 3rd party and addons. I can see why, PS2 players and Xbox cannot use addons, so you having extra stuff is consider gaining an advantage. Honestly though, FFXI is a PvE environment, does it really matter I can see your TP? Its not like PvP where I can see your TP and run away when you WS so you looses your TP. The only thing we do in PT’s are WS when there’s 100TP anyway.

Blizzard takes another approach. They encourage people to write add-ons, to make the MMORPG even more simple. There’s addons (or plugins) that sends data to the famous Thottbot, that tells you where monster die. So when you need to kill a monster from a quest, Thottbot have all that data. Blizzard loves addons, there’s even an add-on button when you login (can see from my character selection screen, bottom left). This is 2007, computer are powerful machines, so lets not play low-tech here.

FFXI, you spend most of your time just to make life more efficient. I like to be efficient, so therefore I can spend “more time” analyzing the battle environment and react responsively. Pressing Cure then pressing Cure Equipment macro is not efficient, hence we use Windower macros. Wow is different, instead of forcing the player to play efficiently, they give you tools, allow you to write tools to BE efficient, so more time is spent to think of strategy / respond to people’s action.

You know all those good stuff we use for FFXI? Mapmon, Logmon, ZeroCast, Tparty, Drawdistace, Parser Windower? Most of these are already built into WoW by Blizzard. 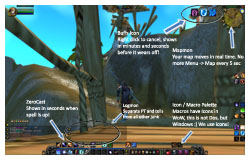 The Interface in World of Warcraft!

Here’s the stuff that’s built in, just the User Interface of WoW comparing to FFXI.

Rather than making you to be efficient, Blizzard focuses on making you skillful in response, thinking and formulating strategy in a short amount of time where as FFXI simply focus on making good macros and your researching skills. FFXI’s stuff is so slow, there’s literally no skill involved in responses. Everything is fast in WoW, reaction and thinking quickly is actually a skill.

Going to take my time to write the difference bit by bit, but if you want to know more about WoW, you should ask those that plays WoW. Etain [7], Mirith, Talisien [8] and Strawberrie [9] are one of the few bloggers. No worries, I still have goals in FFXI, cap parrying and go PvP!