My baby (laptop) broke. What really happened was.. I was doing some research at school. Was kinda tired so I just took a nap with my arm kinda sitting on laptop, just the side so I know if someone takes it. Anyhow, I wake up, was like omg time to goto class. I pulled off my headset and poof! It turned off. And the laptop turned off forever… like that… 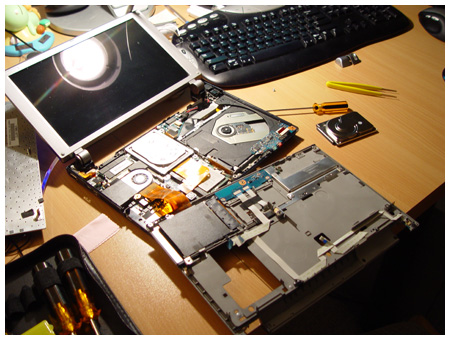 I’ve ran all the test and pretty sure its short circuit or just natural wear out. I do use my laptop a lot so probably killed it a bit faster than I thought. Man… I’m already on my 2nd laptop .. this one only lasted 2 years, my previous laptop lasted 4 years though w

Life’s been horrible. Last 6 years, I always had 2 computer to split the work and now only having a desktop to do everything from work, ffxi, email, IM, omg I just don’t like the computer anymore so I haven’t really been posting. Its.. just weird.. and guess how much Sony charge me for “Diagnose”! Find out below 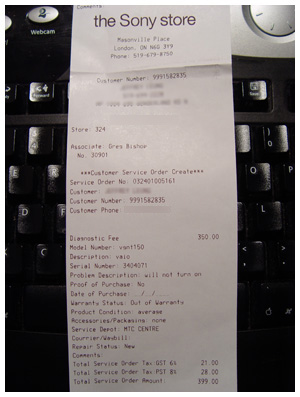 With laptop gone, I kinda lost my daily computing routine such as RSS in the moring at school while reading RSS, digging, Youtubbing, AIM chatting.. lost it all until its fixed. Its near the end of school year too, laptop broke at the wrong time :( I almost wanted to goto Future shop, buy a laptop and return it in 14 days just to replace my laptop’s spot for now :3

So not having my laptop and messed up coputing routine, I just watch a lot of Prison Break Season 2 (OMG its good), i just never expected to be that good! Now I understand what everyone was doing back then when people ran to the TV during fafnir interval. Never knew it was THAT addicting and THAT good.

I didn’t start watching Season 2 because.. I was thinking.. how interesting could it be to run around. But never thought they could create so much drama from “staying away from CoPs” :) So far, I like how season 2 is flowing. I didn’t expect president to lol /wave. That was a good catch. Anyhow…

Watch a bit 24 too. But its getting repetitive. Theres no plot building, none of those people in this season where they had emotionally attachment to Bauer, making it far less interesting when someone dies. Like if Kimberly dies, then its good shit but… they are still alive.

Thinking back, Season 1 when Bauer’s wife dies, now that was good shit. It establish the norm that anyone in 24 can die, making it less interesting but when no one “you really care” dies, then.. it gets boring. Death is so common.. its now lost its meanings.

But ya, with lack of character buidling, it makes 24 less interesting. “I don’t care if he/she dies” is what I always have in mind, more intersted in seeing the bullet flying into their head. Maybe its time for Jack to retire, eat for once (never saw him eating), sleeping, peeing, or just have a laugh w, don’t even think Bauer ever laugh for once!

Where do I watch TV shows? Either BT em or this website.

I realize some of the stuff on this blog isn’t working, well its beacause I was in the mddle of transition and my laptop broke, so data/file is kinda everywhere. As long as its still readable :D sorry about that :3

Anyway, hope I can write some ffxi stuff on desktop, but for now, just this much to keep you entertained.