Call Baby Samurai~ Just to keep everything related to my Samurai progress in ‘-‘. I think my next goal is to cap Parrying Skill. I really see that not being impossible, but takes ages. Its kinda like Goldsmithing but if you have the heart to do something, you’d get it :) So to increase the chance of leveling parrying, I’d went to solo for exp instead of seeking for a party. 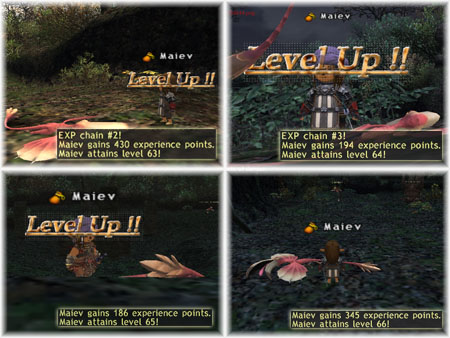 Plenty of exp during my parry skillup, in fact ‘-‘ 4 levels just from parrying skillups! The kicker is… at Lv65 you get Tachi Gekko!! 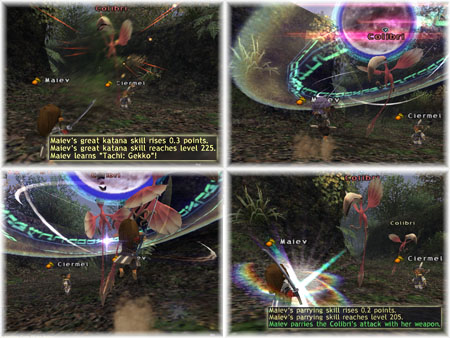 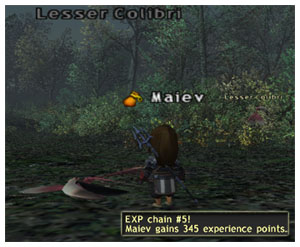 Well subbing war could be a good thing, I mean if your party need a trick partner, can Seigan 3rd eye, let them trick (most Seigan have like 4 blinks on average) then put Hasso back on :) Your attack can be very mean with Berserk :O not to mention TP a bit faster with double attack!

On the other hand, soloing isn’t bad exp at all :) Chain 5 using polearm XD! IMO if you have polearm leveled up, you should take them out during xp parties if its Colibri :) its deinfately not bad damage. Especially how its 5hit WS, as good as Rampage :) Or if you really don’t like Polearm, you can always /rng with Soboro and spam Sidewinder :) Its not very risky unless you get so much crit to the face like Mai’s baby Samurai…

I don’t know how many caught this but… it shows the whole Vanadiel’s world map O.O! 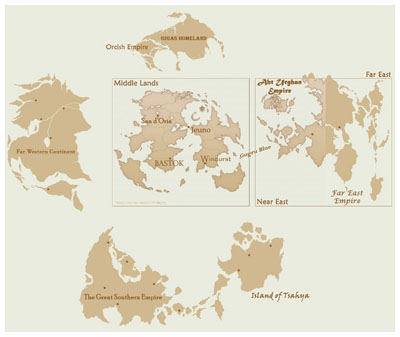 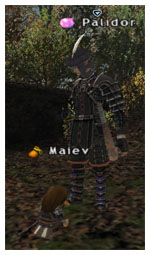 Its f-kin huge! And erm… only 2 island is opened up so far? Damn SE got a few more years to mlik us! Story from NPC such as this one [2] supports the fact that these island was planned and exists too. Amazing heh!

Other amazing thing is… Fenrir people are very lazy people. Palidor wanted me to synth some stuff, I forgot what stuff but that isn’t important. The juice is, after its done, he takes out his warp cudgel and warps hom. I could understand if its far away…. but when you are this close from town [3], there’s a problem =P

Seriously ‘-‘ that is mad close, plus its daytime too so there’s no formors :x On a side note, I have a lot of warp cudgels too, but TRUST me, I’m not that lazy! I just warp a lot XD 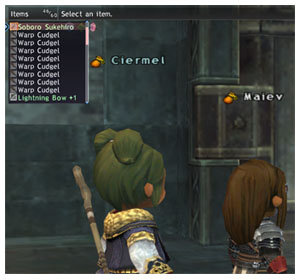 Ya >.> that is a lot of cudgels in Mai inventory! XD Anyhow…

Bewbian almost getting pwn in Besiege. I mean sure drk can solo Kirin, but not when the good stuff comes in a bunch =P 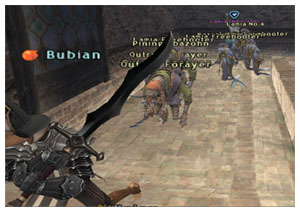 I came across this website [4] :O Very nicely drawn FFXI stuff plus other stuff. Below is just an example O. 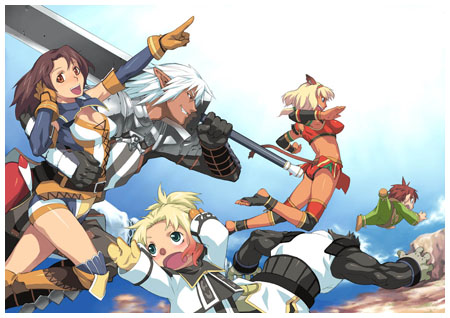 And this LOTR video is amazing….