I haven’t been posting for awhile, was stressed out dealing with emo’s, anyhow!~ Time for some updates~

Sky/Sea in a wk for Cus

I have to say… blu in this bc, is nice nice :) Headbutt was casting every now and then, stunning random JA’s and crap, buying a lot of time. We didn’t even see that many nasty AoE got off :) 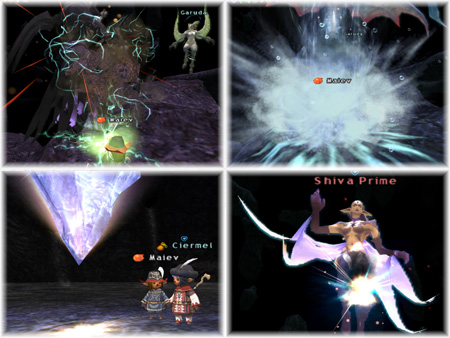 Practicing 2boxing again :) Did a few runs to get Cus his Evoker’s ring, and lol to the Shiva screenshot, looks like a Man + Shiva = Manva :) 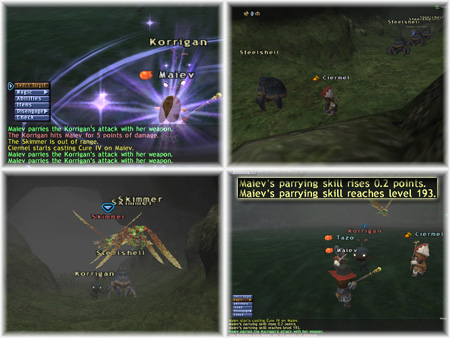 I’d say… with full damage reduction gear and a Taco, I can reduce the damage down to less than 20/hit from Korrigan / Puck..

Doesn’t need top of the line equipment to skillup parry. IMO, the most important pieces of gear needed to do this is…

So here’s how you do it. Go to some Onions camp (if you are new to this, start with Mourouche near Aquarius). Buff yourself with Pro 4 and Phalanx (all others if you want to, but those are the two important ones)

Voke 1, take out your weapon out, hit it and face it! Here’s a few tip to make sure you won’t get interrupted during recast of any spell.

With these in mind, stoneskin can usually go off for mourouche parry skillup. Mourouche shouldn’t even use your convert, its very safe to go solo parrying skillup.

Parrying above 180 is significantly slower since you no longer hit by 7 Mourouche but just 1 Korrigan :/ I’ve tried doing Korrigan with bard, full defense gear and Minuet, its possible to pull it down to 0 damage, but I find it equally good just curing yourself with Cure3, so soloing the last 20 levels (180-200) isn’t bad either.
Rate of skillup would be.. 0.2-0.5/hr! It is a bitch to skill but… at least i think its fun :)

I did some other interesting things too :O, finishing up ToAU mission, soloing Khamira 13 just haven’t had the time to edit it. Its a very simple BC to be soloed by rdm, didn’t even bring any medicine, special gear for it.

Oh yea, did you ever wonder the haste effect, or the amount of recast lowered by wearing Loquac. Earring? Here’s a fully compiled list on BlueGartr. [More details… [1]]

Clicking around, I found a EU linkshell that uses a blog as their way of posting progress. I wanted to create something like this back then for GW, didn’t last very long until we have to swap pearl so ugh :x But here it is…