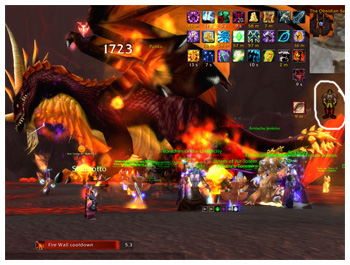 Check Out my Broken Gear!!

The Effect of Guild Bank Repairs!

So you see, not having too much time to play… you naturally don’t even have time to make money. So I’ve been running from 12k gold to now 4k gold, giving a few thousands to Takalo, my “instructor” LOL (yes, I have a variety of friend who plays on same server). So well.. where do I get free money? GUILD REPAIRS!

Okay you see, on the right I’m doing OS25 with PUGS, I think I’ll still beat a lot of meters with broken gear. This was on Monday!
Repair bills in WoW is kinda like errr… exp penalty in FFXI. Both games, you either need to spend time re-leveling or earning the gold to pay for the loss of your e-life. They are roughly the same… but see there’s a new feature, “Guild Repair”, meaning your guild will pay for your repairs :D and our guild leader turns on that feature during Raid.. naturally :) You want to take advantage of it!

3. Why does it seem like many foreign players (NA Players) do not bother to bring medicines and potions to Missions and BCs? Many Japanese players make sure to have Vile Elixirs, Hi-Potions and/or Reraise Earrings.

I mean common, I had a GUN (as Hunter), I had bullets, I had a living healthy pet, with pet food! What else do you expect? XD

So Tuesday came around, its time for our weekly Ulduar 25man Raid. So knowing Guild Repair is going to open “after 1st wipe”, I just went in with pretty broken gear. Not entirely broken, just the shoes… still good! 1/50 is completely working good gear!

We did Flame Leviathan. It was all good until the driver of the tank shot me at the wrong direction when I wasn’t ready [3]. I died, and was probably the only 2-3 people that died…. well since it’s not a full wipe, I just got a Raise and… didn’t had time to repair! Well… that means I was 6 piece broken heading into XT De-constructor! NOT MY FAULT!!! 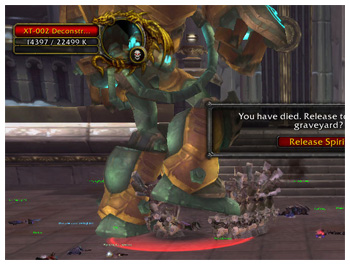 So the fight began, I realize the damage was so… low :D. My AoE wasn’t even doing 1000 on normal hits XD but was more like The Burning Crusade-type damage XD holy moly XD Well… I thought a little bit ahead, since my damage is going to be low, I swap to marksmanship to cover it up XD (since Marksmanship isn’t known for good DPS, so they won’t really notice broken gear). Hay! You all get Trueshot Aura!

If an average repair bill for each person is 8g, then 25ppl is 200g :O I feel kinda horrible knowing I could have done better, simply repairing an item. :o It’s not like I’m broke poor, I’m just stingy. Hay! Stingy isn’t a bad thing :) You save money/gil/whatever!

Actually I was a little sneaky about the best bow :D I totally had an under the table agreement :D Look :) Trading “Restaurant City” Ingredients for the bow [7]! (lawl). After I got the bow, all the sacks/management were like “Shantotto, if you gquit (guild quit), I will come find you” [8] hahaha! Gotta love my funny azn Toronto guild. XD 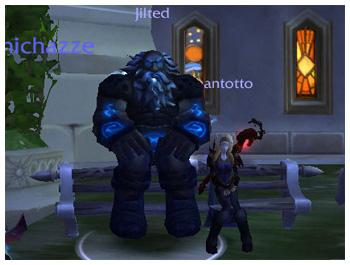 Sitting on a Bench talking about old-school FFXI!

Takalo [9] was a long-term friend of mine. We knew each other back in the TLW days, 2004 of Fenrir [10]. Him and Pdan would just come up to me, bring out his Kclub and wack stupid things infront of me! *grin* Well, he once play WoW, quit and FFXI, then quit FFXI for WoW again. One thing he enjoys, finding WEIRD stuff in-game, doing all the WEIRD quest, and getting WEIRD things. So in WoW, he enjoy finding WEIRD stuff, like WEIRD potion tnat turns you into tiny midgets [11]. Or WEIRD food that turns you into an Alliance [12] like ETAIN [13]x_x

That’s about it for now XD Concludes my WoW update! We’ll be continue with our last-night 25-man Hodir [14] tonight (which kinda cock-block last night!). Maybe I’ll eat Elixirs, use good bullets, take it a little serious and really pimp the meter tonight! We’ll see but for now… Cheers and stay safe :)