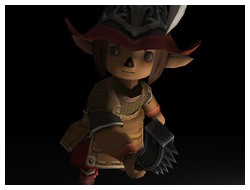 Due to the extreme popularity of the kraken club and trouble arising as a result of a large number of players attempting to acquire the item, the monster that previously dropped the club (Lord of Onzozo) will do so no longer. A new method of obtaining the item is currently under consideration and will be implemented shortly. There are no plans on changing the drop rate of the item in question. However, the development team would like to grant players more opportunities to obtain it.

they better not make my effort going to a waste……. i worked so many months for my kclub.