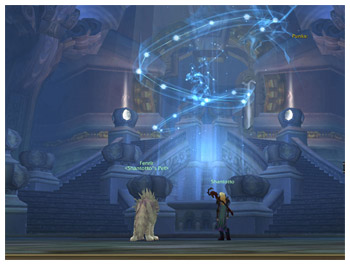 Entry to the Halls of the God in WoW!

PS: This article relates my WoW Experience to well known FFXI bosses and content. Prior WoW knowledge not required for this read. =)

The feeling of adventuring once flourished in FFXI, has now returned in WoW (well… for me). You know how you want to take a further look in a specific place in WoW and your head in RL moved forward to try and see more on a SCREEN? Yea that’s the silly me :D

Another aspect I enjoy WoW is… dungeons really look like dungeons! In Ulduar, each wing got its own personalities and tiles. Although Salvage tiles are a bit boring… but it is somewhat fun to a certain extent. Well… if someone farms my Assault Points, I actually don’t mind going once awhile XD anyway back to WoW talks.

So lets adventure deeper into this wonderful dungeon!

Our guild always starts off with a 25man Vault of Archavon (VoA) [2]. This was always a quick kill :D Go in, do our business, come back right out with phat lewt. The way works is VoA is like an Instanced Nidhogg. You can go visit him once per week, but he will be there waiting for you! I really enjoy this quick raid :D fits my little busy schedule =)

After that, we head to Ulduar, beat the first few easy bosses and then onto Kologarn in Ulduar [3]. He’s the person guarding the gate of the gods :D kind of like a Genbu standing just before the gate to Sky. Easy boss but then still, can’t screw around else Genbu can still wipe an alliance :D did that then move onto Auriaya. 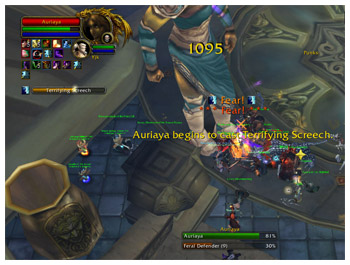 Auriaya! One of the famous Cockblock Boss in Ulduar!

Auriaya is one TOUGH boss… a cockblock for two weeks for us. I don’t even know how to describe him. I guess imagine him being Nidhogg with 2 weak darters and Byakko as Auriaya’s assist.

Then on top of that, you have Feral Defender. This thing respawns 1min after it dies (if you kill it), everytime you kill it, it leaves a manhole that does 9000dmg/sec. Basically, dead meat if you walk over it. Feral Defender can charge (1sec stun), can stun, and have a buff that increase its damage bey 50%, up to 9 times.

Auriaya is a boss that probably takes 8 minutes of continuous DPS (for us right now at least) to take it down. When engage, we have 4 tanks, 1 on boss, 1 on feral defender, and 2 on Sanctum sentry. Once all provoke (kinda like 5AA), spread them to 4 different corners (beyond 20 yards), first kill off 2 Sentry. After that, we stand infront of Auriaya and DPS there. The Feral Defender tank will tank that thing on the side. While we fight, we must ensure we are infront, because once he fear, it will be too far for AoE heal. When Feral Defender start getting his 500% damage buff, we go and kill that thing off, he creates a void zone at the middle of no where and we continue.

Now the dangerous is people at the back by accident. If they get fear into the Void Zone, its like instant spike flail… you die.

Feral Defender is quite annoying, it randomly charges from time to time, especially if you are on top of the hate list. In the case for me, I was always getting randomly charged by the Feral Defender. I had to have deterrance up if I want to DPS really quick. I was holding back already :x the mage got stoneskin… I got… flesh :( not gewd.

I wanted to record it because… it looks so funny when we are good at it. We get fear (spread way the fuk out), then all cluster again. Its like a dance from bird-eye view XD. Well since we get Fear occasionally, it allows me to buy time for my Black Arrow to become available, with Explosive Shot. So yea, rocked the parser with flying colors XD. I also didn’t even have elixirs (knowing we probably going to wipe) and shitty bullets :D 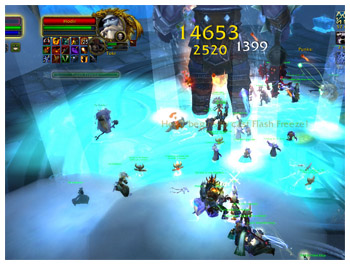 Hodir was an interesting boss to date. This boss doesn’t really do anything threatening, but the environment is. If you take a look at the screenshot on the right, you see light from the ceiling. Those are buffs :D some buff healing, some buff damage, some buff speed. You don’t know until you step on it but hay :D 14653 on Heroic Ulduar Boss.. I don’t mind =)

It’s not really a hunter fight since we got to strafe… and when you are strafing, you don’t get the damage buff from Sniper Training. The reason we strafe is because… there are rocks/snow balls falling from the ceiling so we must avoid. On top of that, its an ice chamber, you get a debuff if you do not move call “Getting Frozen”. The longer you stand,the colder you get and more damage you take. So that itself, makes you keep moving. So you got to keep moving and avoid fallin rocks/snow.

To make matters worse, he does something call a Flash Freeze [6], where whoever is standing on the FLOOR of the ice chamber gets frozen for 5 minutes. It’s kinda like CoP last fight to get the Twilight from both edge of Garden of Ru’Hmet to prevent being petrify on the fight. So the way to prevent it is… when snow/rock falls from the ceiling, it leaves a pack of snow on the ground. Right after that patch of snow appears on the ground, you have to step on it to avoid the Flash Freeze [7]. You see a warning before it hits the ground, but then you can’t get there early else you’d get smash by the snow and instant death (which I got hit once :x so embarrassing since I’m like “don’t wanna blow my own horn“, but a lot of DPS gone, next thing is you get laughed at by 24 other people on vent hehe). It’s still not bad topping the meter, but yea obviously I lose 5%. Regardless, again no elixir XD and no good bullets.. I’m a very cheap ass XD 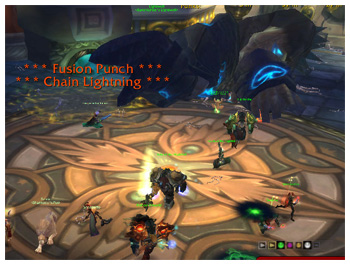 Everyone know on WoW forum that Survival is the Spec to top the DPS [9] (Note the Rogues). There are no doubts about that fact but … sometimes you got to think in a Raid environment. What can I do to improve the Raid as a whole. Well for me, I started testing a Marksmanship Spec on trash mobs [10] for Ulduar 3.1 25 man Raid. It’s the same reason why people invite Bards to party. They are here to buff :D

Marksmanship got an aura.. that buffs 10% damage. Marksmanship isn’t as strong as Survival, but simply that AoE Aura is worth a second thought. For me, I’ve proven myself already in multiple months of my ability to pull top DPS. I spent a lot of time crunching the numbers, optimizing shot rotation and optimizing buttons to push as much damage as possible. Well now I took that to Marksmanship, a secondary spec that buffs the Raid’s DPS output by a kick ass 5-6% (mages don’t benefit). If you look at the screenshot on the right vs the top (Note the Rogues), you see a bunch of them got DPS increase, by a chunk :D

Whenever I see a boss that we might get cockblock due to lack of DPS, I usually go Marksmanship :D but yea if everything is smooth sail, then I’ll go Survival. It is more fun :D

Look at the effects: Your healing spells have a chance to cause Blessing of Ancient Kings for 15 seconds allowing your heals to shield the target absorbing damage equal to 15% of the amount healed.

Fucking awesome, mini Stoneskin on every heal. Now THAT is a MAGE relic. I’d get this if this was the case in FFXI, but no SE Dev fails. Mythics Enhance Convert hahaha! GTFO XD 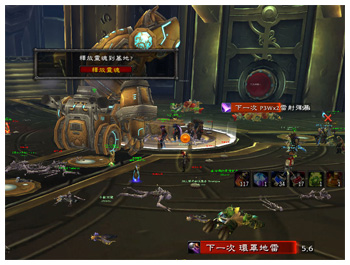 Really great achievement. These guys took it so hardcore :O The last boss of Ulduar is weird. Mimiron is like FFXI Pandemonium Warden, but instead of disappearing, it’s got a self-destruct ability that you can turn on :D Well this puts on some challenge XD (think of it as switching on or off meteor on AV).

Here’s the article on WoW Wiki on Mimiron [18]… just look at the ability list.. holy fuk.. 4 phases. So much to plan, and so many places that could go wrong.

I saw the video and the fact that the Priest go eat a rocket manually, die with Spirit of Redemption [19] to free heal 15sec, revive and heal again is just amazing. He did it the right time too :D Now that’s skills :D I also wish WHM in FFXI could do that. Once you die, you can free heal for 15sec as a spirit. This would for sure make WHM very unique. But no… :D

Anyway, that’s it for the WoW talks, I’ll post more as I get more fighting experience with Ulduar! Stay tuned XD