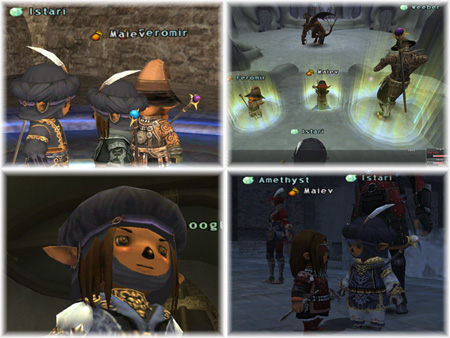 More Mai and Istari’s gay bar pictures! Ya introducing the term “gay bar” :D we look like couples in game but.. ugh.. we are both guys behind the keyboard :/ I got a turban just so I look a bit like Istari but apparently… the hairstyle doesn’t go too well with the turban rofl . With the turban, it now boost my Convert to be 1165hp and 1168mp I wonder if I can break 1200 barrier

A farewell to a very sweet talu – Bijuo/Nanni ~

Sad!!! I really can’t believe some people are that EMO in real life.. Bijuo’s husband, Trac decided to delete her character again… 1st one was Nanni, a 75whm, and now a brd, some people are WAY too EMO… Trac plays WoW, maybe Nanni shuold go delete his wow character too.

Seriously, no matter how much I hate a person, even if I grant access to their account, I would not delete their stuff as a way to express my agression or revenge. Its someone’s work, time and effort and there’s probably even intrinsic and emotional attachment to these “virtual” characters, wtf is people really thinking.

The 1st SS and last SS I took with Bijuo 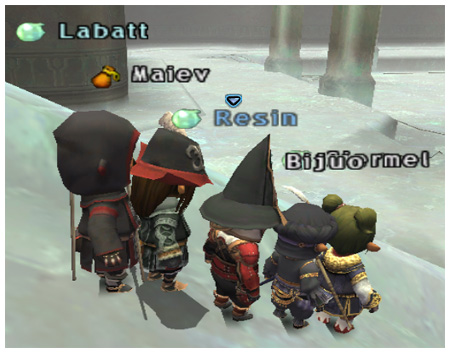 Life sucks if you were Bijuo.

I caught this in BG forum, but LOL someone really did some SERIOUS research in RDM’s MND-based debuffs! Lets take a look!

Duration: I suppose it would be “successfully” landing the spel, thus having “some sort of duration”, I mean 0 duration means you pretty much fail rdm.

Proc: How many times it will kick in, a 100% Proc rate for 10 sec means during that 10 seconds, anything that the monster does for the next 10 second will get paralyze, Proc rate is basically (# of paralyzed attack / total attack).

I’ve done some test with Roranora back at um.. UB? rofl Omen 1? He was trying to convince me to buy HQ staves when I was power leveling my Goldsmithing, so it must be a really convincing argument, and it did, since blm have low enfeebling, it would significantly tell us equipping what would improve landing debuffs on aura statues. After numerous testing, we’ve concluded that… HQ staves > enfeebling dagger (which is what I used back then) helps with landing enfeebling spells. This is a fact. (at least to me)

Looking back up at the graph, the determinants for “duration” are from enfeebling skills, HQ staves, and MND. We know that HQ staves > enfeebling, and the number on the graph totally reflects that relationship, so at least to me, this graph isn’t bullshitting

Well rather you believe it or not, I’m goin summarize what I see. Overall order of importance: MND > Enfeebling Skills > HQ Staves. MND plays a major role in the calculation of Proc rate AND duration, no doubt. Enfeebling is second because… it plays both a major role in both Proc rate and Duration… whereas HQ staves only helps on landing, doesn’t do crap about um.. Proc rate.

So I guess if you are having trouble landing, you are better off with HQ staves, but for me who um.. have no problem with it, I’m going to consider using enfeebling dagger again :3 for the higher Proc rate! Afterall got to prove this graph is true ‘-’

Went to watch a movie a few days ago. Although I’m not really a big fan of James Bond, but I like these kind of movie more than Matrix . The storyline is kind of okay… not something amazing that can make you go wow but somehow, I think it was a good movie, maybe afterall keeping a movie simple is a nice movie

Its really simple, signup, post, tell us about it, ur connected! Its free with no ads too :o! Why the heck not

Speaking of blogging, I’m now using a desktop client (RocketPost!) to write insetad of a web-based crappy client that can erase post if you looses connection or “no connection” when you are about to submit (rarely happens but it can)! Plus I can do formatting, like bigger text for titles, hope it helps

PS: Look what I found! Thanks to Technorati, you can dig people’s secrets :D