Welcome to the world of Alzahbi as Home Point!

Finish some jobs in Jeuno, warp to Alzahbi, a besiege… walked beside a sappers.. next thing…You know you love sappers =P I play a sapper in Dota too, I go around suicide myself for huge damage w! I sometime think, I’d hate to play myself (meaning someone who plays my style)!

Speaking of dead tarus… I was burning my xp ring @ mire and… I found a similar face! Dead Etain! Mebbe I have to make a category of “Dead Taru Pics” soon ^^; 90% would be dead Etain taru! 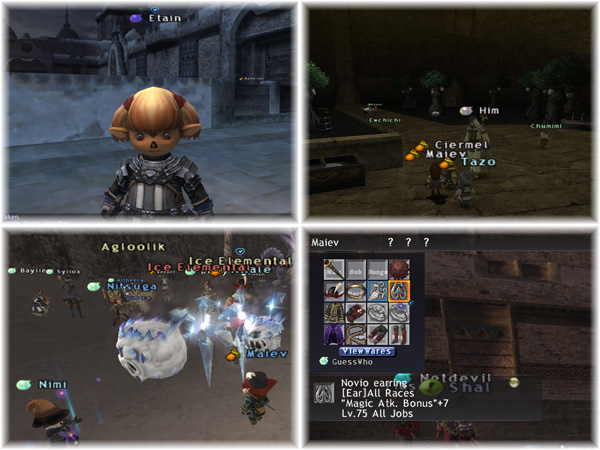 So Golddiggers now not only digs gold, but have to be an xp whore? Holy crap this biatch plays like 24/7 I bet! Maat’s cap and still have all the time to craft and make money! 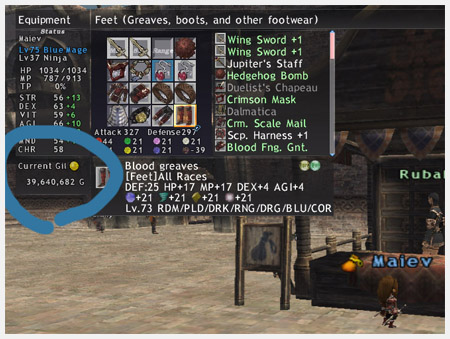 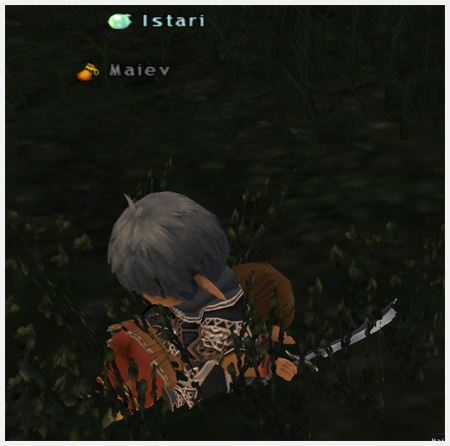 its been like 2 weeks, think I should bring it up now! there were ugh, probably at most 6blm, -ga like a shit load of stone not making sure it can all be killed is so lol, seeing blm dying so often, I decided to help out with killing stones, apparently this emo tard thinks the stone should be “at the middle” b4 its killed so everyone can benefit the stones.

That’s like saying telling melee to stay at a spot, wait for a person to “pull a mob”, like xp parties and then go kill? dude why not just announce “blue stones”, and those that in-need of hp run up to mages and get the full restore? No, Daede rather have blm “kite” stones to the melees, THEN nuke it out. kay -.- i’m out!

And the post that made me smile! Thanks to Fero’s post :o I really didn’t wanna pull out the emo stick! Seriously ‘-‘ with him around, I’d rather gil buy AF’s than being around emo’s like him.

Yes -.- google’s evil, I was bored, so I google myself (maiev, ffxi) [5] and I found ‘-‘ results listed me on bg, youtube, lol -.- (at first I google Maiev only, to see how the character is progressing in the World of Warcraft or find videos about Maiev on warcraft 3, cuz i never finished the game. (the bg thread is a bit deep into google)

Although the comment was somehow used in the ugh… good context (which I didn’t believe at first, I mean if Rora been reading this, I was expecting he would hate my guts). It would be the last person I expect to um.. use me in an example like that, mebbe I misjudge someone? I guess only time would find out for us.

Anyway, I was on youtube and search maiev for some Warcraft 3 hero strategy, storyline of War3 about her (i never finished the game) and i found these [7]…

lol Zimph posted vids … MY vids.. on youtube a month ago not even tellin me about it ‘-‘! Sue him!!11!! Actually I’m pleased he really enjoyed those vids. He’s not even in it if I remember ‘-‘! He enjoyed it soo much that he made an account to post em? @@

Speaking of Emo’s, GM goes Emo’s too towards Paladin that tanks in Earth Staff :O! I got this pic off BG forum

How do people get here? 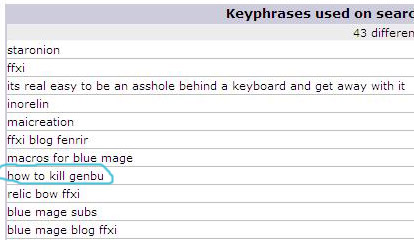 All vid links are broken, I took out some codes that affected the operation of feeds, I’ll go back relink when I’m back home. This weekend, went out to Toronto, to meet some FFXI people in real life! Its goin be kewh! I’ll post pics if they are ok about it ‘-‘! But ya ugh.. this was a post typed up b4 I left =P. I’d probably won’t be back for at least 24hrs after you read this post :O! I’ll catch up with u peeps’ blog when I get home!

Btw, also fixed Tazo’s feeds. There’s problem with the installation so I had to use another plugin to enable feed. So now go feed Tazo! rofl.