Yes, you got my word! This blu, is absolutely retarded imo. 73blu outparse 74/nin blu, so much for the “blinks” heh.

If you are a blue mage and reading this, you better be subbing thf and using TP to do CA stuff… ok lets start rambling about this shit ass blu.

Kay! I can’t believe someone play till Lv73 blu and doesn’t know what the hell is CA…

Okay, I wasn’t even doing my best damage.. I calculated that even if I WS light, the damage I lost can be compensated from the Blm’s magic burst, I was screwing around, helping others enjoying their game AND still outparse /nin blus 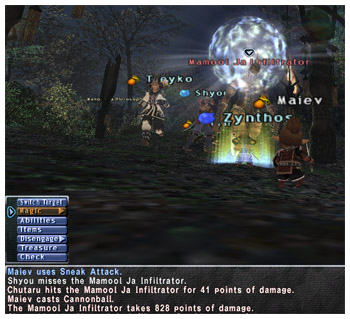 But this gotta be my favorite SS [4], he compensated my 1000 damage by doing Vorpal Blade (5hit ws), Disseverment and Hysteric Barrage. Lets compare some stuff.

Enough said, if you are not soloing, you are not suppose to sub nin. Its gay, pure gay! I’m sorry!
Parser Results [5]